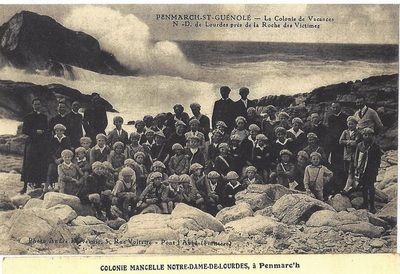 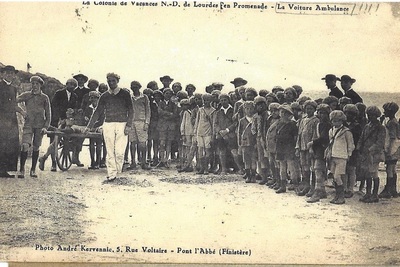 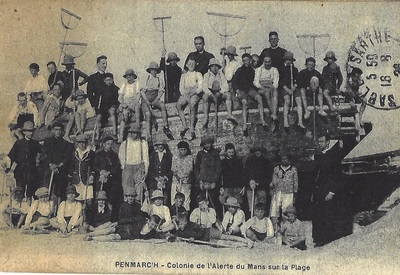 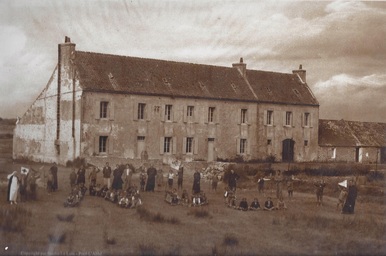 The property:
In the beginning of the XIX century, the first cottage was constructed. In 1880, the Baron Laffite family, of Parisian origin, bought the land just up to the ocean and constructed an imposing farmhouse to serve as a second home. At that time, it was very exotic to vacation in Brittany.


The building was later requisitioned by the Kommandantur during the war.


Ruined in the fifties by the follies of the last Baron, the property was resold in large part to the bishopric du Mans which would later merge into the vacation camp “Notre Dame du Mans.” The bishopric of Quimper would later take over with the "Cadets d'Arvor."

In the meantime, Spanish refugees of Francoism were housed there.

At the height of its glory, the camp housed 100 children, and about twenty nuns and as many seminarians: the girls during July, and the boys during August. In accordance with new standards, additional wings were added, but the upkeep was too expensive.
During the mid-80s, the farm camp closed its doors permanently. The building stayed abandoned  for 6 years, and was then involved in a legal struggle between a dishonest business man and an unprincipled intermediary. The building would continue to suffer until 2007. 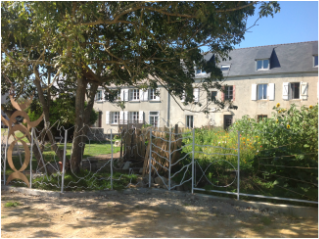 Hello, I'm Sophie Vargas. I bought the property in 2007 after an improbable journey which made me an executive of marketing in Paris and then a jungle guide in the Amazon. Today, I love, I live in, and I manage this orginal place, the Manoir du Ster in Penmarch, situated just five minutes from a magnificent and almost deserted beach. I thank the gods everyday that I am able to live in this beautiful place in nature. I love sharing with travelers who also appreciate this site.

Of course, we must accept guests here to maintian the property, but above all it is a bustling place. The animals always wander miserably, feeling like orphans when the season is over and the guests leave. This place is magic when people meet here; there are football games, barbecues with roasted marshmellows, and fishing! Children fill my aquariums with fish from the pond, and everyone rests on deckchairs while they wait for the tide to rise so they can go swimming.

It's the opposite of mass tourism and the overcrowing at campsites: here we offer one hectare for 4 rental spaces and some herbivores! 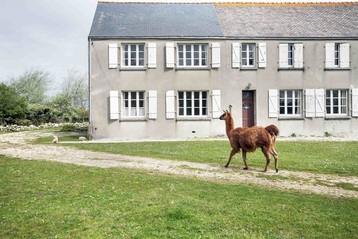 We offer space, nature, tranquility, and a small shady path that leads right to the beach! During high-tide, the sea is just down the road. During low-tide, the beach is fantastic: small rocks, shells, edible seaweed, the smell of kelp... At very high tides, the clam beds become accessible, the beautiful periwinkle and "ormaux" shells are right there at your feet! Briefly, Manoir du Ster offers Brittany in all its splendor.  When it is nice out, it's great, and when it is windy we rejoice because the waves will be splendid at Point "La Torche" and along the rocks of Saint Guénolé !